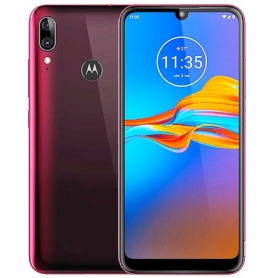 Motorola Moto E6 Plus Android Smartphone is not announced yet. It is running on the Mediatek MT6762 Helio P22 (12 nm) processor with PowerVR GE8320 GPU. The phone has 32GB 4GB RAM and internal storage is expandable using microSD, up to 256 GB.

The Motorola Moto E6 Plus has a 6.0 inches, 720 x 1560 pixels IPS display with a pixel density of 286 ppi. Coming to cameras, it has a 13 MP rear camera and a 5 MP front camera for selfies. It has a microUSB port for data syncing and charging. There is a fingerprint sensor present on the Motorola Moto E6 Plus as well, along with a magnetic field sensor (compass), proximity sensor and accelerometer sensor. It is a dual SIM smartphone with support for 4G LTE, USB OTG, Wi-Fi, FM Radio and GPS too.