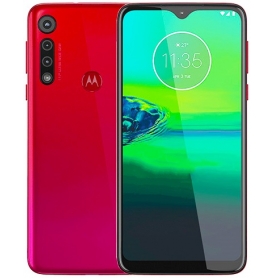 Motorola Moto G8 Play Android Smartphone was launched in Announcement - October 2019. It is running on the Mediatek MT6771 Helio P70 (12nm) processor with Mali-G72 MP3 GPU. The phone has 4 GB RAM and 64 GB of internal storage which is expandable using microSD, up to 512 GB (uses shared SIM slot).

The Motorola Moto G8 Play has a 6.2 inches, 720 x 1520 pixels IPS display with a pixel density of 271 ppi. Coming to cameras, it has a 13 MP rear camera and a 8 MP front camera for selfies. It has a USB Type-C port for data syncing and charging. There is a fingerprint sensor present on the Motorola Moto G8 Play as well, along with a magnetic field sensor (compass), proximity sensor and accelerometer sensor. It is a dual SIM smartphone with support for 4G LTE, USB OTG, NFC, Wi-Fi, FM Radio and GPS too.